Marina Ramirez is a young woman with a vision…an Olympic vision.
By Adrian Perez 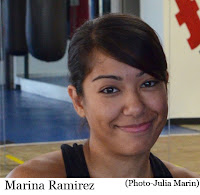 SACRAMENTO, CA -- With lightening speed, Marina pounds the punching bag as if to knock it from its hook at the Prime Time Boxing gym in Sacramento, California.  Anyone standing close by can feel the power punches in the stomach that the number 2 nationally Ranked boxer lands on the bag.  Stepping back, she pauses, looks at us, and flashes the smile of a pretty and shy girl.
Marina Ramirez is a young woman with a vision…an Olympic vision.  At five-foot even and edging 112 pounds, her 4-hour daily training and hard-body tells you she means business.  Her goal?  To make the 2012 U.S. Olympic Women’s Boxing Team.  So what motivates the 21-year old to become a boxer?
“I really like it,” says Marina while beaming a smile.  “It’s what I want to do and I’m good at it.” 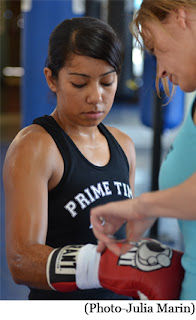 And, she’s convincingly believable in the ring.
Born in the small community of Parma, Idaho, about 30 minutes outside of Boise, Marina grew up as an outdoor girl, riding horses (even a bull) and an athlete (running cross-country and playing basketball.)    But, it was getting bullied that drove her to learn how to box.
“I learned to box to stop the bullying and found that I liked the sport,” she says.  “I also beat up a couple of boys.”
Interestingly, the soft-spoken Latina does not pass as the image of a boxer, especially that created by other women boxers like Laila Ali, who has been inspiration for Marina.
“I work for the HardRock Café in Las Vegas,” says Marina.  “I need to provide for myself, and that’s where I live.  But, I’m a very nice person when I’m not in the ring.” 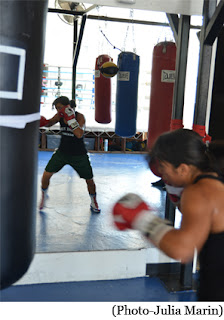 In fact, if anyone met Marina in the street, they would see her as a pretty and feminine young girl, unsuspecting of her real skills and power-punching abilities.
“I took karate, but I really like boxing,” she remarks.
Helping Marina in her corner is Cary Williams-Nunez, who is one of only three women in the nation trained to coach Olympic level boxing for women and owner of the Prime Time Boxing gym in Sacramento.
“There are only three weight classes for the women in the Olympics, 112 pounds, 134 pounds, and 164 pounds,” says Cary.  “She’s fast and very determined and she’s our secret little weapon when we go to the Golden Gloves in Florida.”
Women’s boxing was added to the 2012 London Olympics by the International Olympics Committee, giving legitimacy to the sport, which has had limited exposure having been limited only to the professional ranks.
“I have dedicated my life to boxing,” says Marina.  “I used to drive 30 miles from where I lived (in Idaho) to a boxing gym when I first started.”
Marina won her first amateur fight, which gave her additional motivation to continue and has since collected 30 fights, raising the eyebrow of the U.S. Women’s Olympic Boxing team coaches. 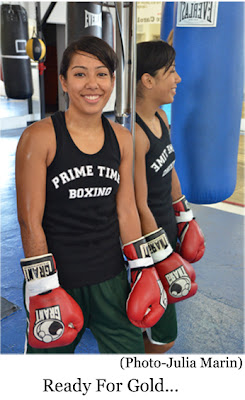 “My parents and my friends support me, and that’s very important to me,” says Marina, also sharing that she owns a horse back in Parma where her parents live as well.
Upon turning 18, she moved to Las Vegas, seeking better training and an opportunity to be more competitive.  It was here where Cary saw Marina at an amateur tournament and asked if she wanted to train at her Sacramento gym.  Spending a week at Prime Time Boxing has helped sharpen Marina’s skills preparing her for the Golden Gloves.
“I think there is going to be a flood of girls, like Marina, who will be coming in when the sport is televised from the Olympics,” says Cary.  “I’ve seen a number of girls already and some will be showing up over the next few years with a lot of experience.”
"Team Marina" are still seeking sponsors.  Follow Marina’s career through www.primetimeboxing.com Facebook page.
Posted by POP-9 Communications at 7:03 PM