Latina shares about life with HIV

Like so many others, Maria never thought contracting HIV was possible.
By Lisa Laing, Stopping The Hate
MIAMI, FL - Maria Mejia is 37 years old, born in Colombia and has lived in Miami, Florida her entire life. She discovered she was HIV Positive when she was with the Job Corps Program where they tested individuals for HIV. She was infected with virus around the age 16 from her first boyfriend who at the time, unknowingly to her, was and I.V. drug user and also a gang member and so was she at the time, it was her family at that time. She had a wonderful mother growing up, but at the age of 3 was sexually molested by an uncle and having to deal with a mentally abusive father she ran away from home at the age of 13, which is when she met the boyfriend who would ultimately change her life forever.
Maria, like so many others in the time period back then, never thought contracting HIV was possible because so many people thought it was just a homosexual disease, as we all know today, AIDS is a worldwide epidemic that doesn't discriminate when it comes to sexual orientation. When Maria discovered she had contracted the HIV virus, she felt as though her life was over and went back home to die. As the years passed she realized that she was not dying and accepted the fact that this disease would be with her until the end. She became spiritual and began loving herself again, and decided she would make changes to her life so that she could continue forward with her life.
She says that in ways, HIV/AIDS actually saved her life. She became and activist and an advocate and realized that by sharing her story with others, she could save lives. Her 20 year journey has not been easy, because of the stigma attached to the disease itself, which is why she decided to come out of the HIV/AIDS closet and help others. She says that she doesn't want to feel like she's being treated like a criminal and constantly hide from it, she is a human being who just happens to have an illness. 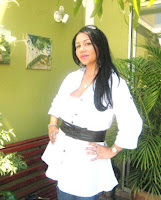 She is a blogger at Thebody.com and a Girl Like Me from The Well Project. She helps others who have been infected and affected by this illness. She is also a peer educator for Miami Jackson University of Miami helping with educational classes, a volunteer for the Red Cross and was trained by the Health Department to be a pre and post counselor, and doing testing. Maria has been a model for HIV medications, and is currently in the Mac Campaign (My Aids Campaign). She has many dreams and wants to reach the whole world. She is a committed warrior in the campaign to help end the AIDS epidemic.
It only takes one person to change the world, and each time someone like Maria steps forward to tell their story, the world changes for the better.
Where did you grow up?
I grew up in Miami, Florida.
What is your relationship like with your family?
My relationship with my family is awesome! My mother has been my rock from the beginning but there are some people in my family in Colombia where I am from that think I have another illness, they are very ignorant to the subject.
Does your family know and if so how did they react when you first told them?
My mother was the first one I told back in 1991, back then there was even more stigma, she accepted me and by tried to protect me from being hurt. She told me this is something we will keep to ourselves, we will say you have another illness. After the years passed I started feeling out some of my family member and disclosed to a few, they reacted really well because I was a trained HIV educator and I made sure I educated them long before I disclosed it to them.
Today people see HIV/AIDS as a chronic disease because of the medications that are available, but I think that undermines the disease itself. What can you tell our readers about the HIV/AIDS virus so that they truly understand the effects it can have on the body? 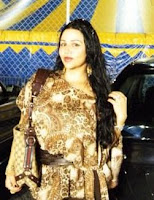 Thebody.com and write articles for the Well Project A Girl Like Me. I also speak at conferences. I volunteer at Jackson Memorial Hospital at the University of Miami as a Peer Educator. Through my Facebook page and email I have for the body.com I give advice to those newly diagnosed or those who have a long history with the virus and those who are suicidal.  Among other activities, I give talks in Miami Dade County Public Schools. I've been active in this fight and soon I will join Positive Connections to lecture and I will be part of the plan committee.
What would your final message be for people?
If you have unprotected sex, it only takes once to get HIV/AIDS. It can happen to anyone, from the youngest to the oldest. We are strong people and survivors, please do not minimize the disease. Get tested, it is better to know than not know, so lives can be saved. "Having HIV / AIDS is not a death penalty, but it is a life sentence."
Posted by POP-9 Communications at 11:26 AM