There are many different ways of making Posolè, based on the taste each cooking person’s taste, yet it’s simple to make.
The key ingredients used are onions, garlic, and chilies.  They are the foundation of the broth along with the meat.  Historically, Posolè is made with pork meat including la pierna (butt), espinaso (spine), lomo (loin), and pata (foot).  But the pork can be substituted with chicken, pork rinds, turkey and vegetarian, usually without losing the flavor. 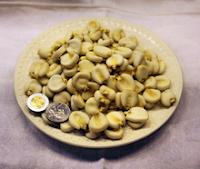 Today, a staple ingredient has become optional, but it is what made this soup a delicacy with Spanish Conquistadores writing about it and introducing it to their Queen - the corn (maiz) or hominy.  Corn was sacred among many of the indigenous inhabitants of pre-Columbian America and was viewed as a true gift of the Gods.  Many tribes believed that God had made humans from corn.
Well, I happen to like pork in my recipe with maiz (hominy) - in fact, in my home, the more maiz the better.
I make Posolè as the ancient peoples of Mexico did centuries ago, only for special occasions.   Plus, leftover Posolè is ever so tasteful, or as we Latinos call it “recalentado” (reheated).  After letting the broth cool, it becomes thicker because of the fat in the pig’s feet, but when it’s reheated slowly, the meat falls apart because of its tenderness.  By the way, before cooking, I wrap the pig’s feet to help keep them together.
Posolè is a great soup for the “pobrecitos” (poor ones) who over indulged the night before during a celebration and suffer from a “cruda” (hangover).  I can personally say that it does wonders for an upset stomach.
I always set up the table in a “buffet” style, where family and guests serve their own bowls of Posolè soup and garnish it with shredded cabbage, coarsely chopped onions and tomatos, sliced radishes, and slices of lime.  I do the same when making the “tortas” (sandwiches made with French rolls or bolios) and tostadas, except instead of providing the soup I only provide the reheated leftover Posolè meat.
As with many Mexican foods, Pozolè can be enjoyed with a beverage of your liking.  My favorite is a good Mexican beer or margarita.
I hope you can enjoy this recipe and be sure to measure it for your own taste - until the next time. 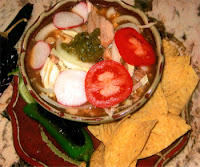 My Posolè Recipe
(For 20 People)
The Soup
Fill a 20qt stockpot to ¾ water
Add:  1 onion cut in half; 1 whole peeled garlic head; port meat (stir occasionally to prevent meat from sticking to the pot)
Boil meat and ingredients for one-half hour (when foam appears, remove with spoon – this may occur a couple of times)
When foaming stops, add: ¼ cup salt; ¼ cup garlic salt and reduce heat to slow boil for one-half hour
Peel and clean chili pods and place in a medium saucepan filled with ¾ water and let it simmer until the pods soften and water turns red, then let it cool
Take soften pods and place into blender and add a little of the water from the saucepan.  Grind until liquid.  Pour through strainer into the soup, which should have been cooking for about an hour.
Add two cans of hominy and continue simmering for 20 to 30 minutes
Pour into serving bowl
Garnishments
Thinly slice 1 head of cabbage and 6 large radishes and place in separate serving bowls
Coarsely chop three large tomatoes and 1 onion and place in separate serving bowls
Pour ½ cup of Mexican sour cream into serving bowl
Pour ½ cup of salsa into serving bowl
Ready to serve.
Posted by POP-9 Communications at 1:21 PM