HOLLYWOOD (Herald de Paris ) -- According to lacosmopolatina.com, “Being a Latina in the US is fabulous, but it comes with its own set of challenges. Sure we rock the best of both worlds, but it’s not always easy striking the right balance between traditional, church-going, family-oriented good girl life and sexy, independent working-woman. We love Jimmy Choos and we love maduros. We love our mamis even when they nag in Spanish about our gringo boyfriends; and we rely on la Virgencita as much as we do on our iPhones. Sometimes, though, it’s still hard battling stereotypes. For example, we are not all Mexican (there are like 20 other nationalities, people!) and we don’t all break out into dance the minute we hear the sound of congas and an electronic keyboard (thanks, Dave Chapelle, for that one). And it’s annoying being constantly referred to as “spicy” or “caliente”. There are many non-food related adjectives I’d rather be described as. Overall, though, it’s pretty fantastic being bicultural. www.LaCosmopolatina.com understands and celebrates that, challenges and all. That’s why you’ll always find everything you need to know this minute on LaCosmo to continue being your fabulous self.”
Herald de Paris Deputy Managing Editor Dr. Al Carlos Hernandez, through an introduction by Filmmaker David Mendez last year, finally had a chance to talk to Website co founders, Lizabeth Cordozo and Tanya Alverez:
AC: What is LaCosmopolatina all about? Purpose, goals, mission?
Liz: LaCosmopolatina offers daily tips for Latinas who think in American but love in Spanish. We tap into the wisdom of our mothers, tias and abuelas for generations-old info and marry it with the latest trends. We deliver tips written from a Latin perspective to Latinas across the nation, with the voice of your amiga who is sassy and opinionated, but you don’t mind because she’s funny. It was created to fill the existing void of content directed to US Hispanic females whose dominant language is English, but who embrace their heritage and wish to stay in touch with their roots. Our message is about enhancing a Latina’s life and inspiring her by covering important lifestyle topics and amazing Latinas in a way that relates to her own personal experiences. Latinas in the US aren’t consuming their media on Telemundo, Univision or El Diario/La Prensa. They’re reading the New York Times, Real Simple Magazine, Daily Candy and The Economist. They’re listening to the BBC, NPR, and CNBC. They’re watching Desperate Housewives, Modern Family or Grey’s Anatomy. I ask who is reaching them? Where is a lifestyle site on the Internet that is specifically for them? There aren’t that many. We’re the answer.
AC: Tell us a little about yourselves, Lizbeth and Tanya? 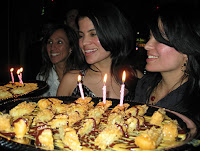